How many cemeteries have there been in Sandy Hill? The answer is surprisingly complicated.

We know for sure of the Sandy Hill cemeteries (sometimes referred to in the singular) that were established in 1845 to replace an older 1828 cemetery located directly south of Parliament Hill (then Barrack Hill) roughly in the block formed today by Sparks, Metcalfe, Queen and Elgin Sts. Most, but not all, of the remains[1]of that cemetery were moved to a new burial ground on unused Ordnance land east of town. Confusingly, these Sandy Hill Cemeteries were located in what is today Macdonald Park in Lowertown, but at the time considered part of Sandy Hill.

Land was set aside for the Anglican and Presbyterian churches first (east of Charlotte St.), with the Catholic and Wesleyan Methodists following a few years later west of Charlotte St. By 1872, these cemeteries too were full and the City opened two new cemeteries further east still at Beechwood and Notre Dame.

While families were encouraged to move the remains of their loved ones to the new cemeteries, not all did so and the cemeteries gradually fell into disrepair. As the years went by, the cemeteries’ unkempt state became a growing public concern. In 1895, a writer to the Ottawa Journal complained that

Sandy Hill cemetery is not only an ugly spot on which to feast the eyes of citizens and visitors, but … it is made hideous in other ways. During the summer months on Sunday afternoons, numbers of boys congregate there to play football and howl and bawl among the broken headstones. And what is worse, in the evenings the cemetery is made the habitual resort of not over-particular or very respectable couples. (22 March 1895).

Seven years later, the situation had not improved. The Ottawa Journal noted that “Not infrequently the boys make excursions to the cemetery for the express purpose of unearthing remains and sculls (sic) from that place have been carried by gangs of young ruffians to different parts of the city”. (30 August 1902)

Moving remains to the new cemeteries created its own problems as not all families bothered to refill the open grave left behind. This created a hazard for walkers, particularly at night. In 1902, an old man on a stroll fell into an open grave and was not rescued for two hours.

It was not until 1909, after much controversy, that the Churches transferred the cemetery land to the City to create a park. In  1912, the Ottawa Improvement Commission (the forerunner of the National Capital Commission) covered over the remaining graves and commissioned one of Canada’s first  landscape architects, Frederick G. Todd, to design the park that now exists and named after Sir John A. Macdonald. 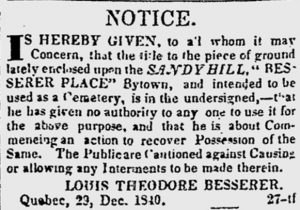 But the Sandy Hill cemeteries were not the first burial grounds to be located in Sandy Hill. Records indicate that perhaps three other cemeteries used to exist in Sandy Hill. An 1842 map shows a Roman Catholic cemetery at the southeast corner of Cumberland and Rideau Sts. In the 1830s, there may have been a cemetery where St Joseph Church now stands and there is a record of a thirty-year old man named Fitzgerald being buried there in August 1837. That may not have been an official burial ground as in 1841 Louis-Théodore Besserer, the owner of the land, felt compelled to place a notice in the Bytown Gazette warning that he was about to launch an action to recover possession of some of his land used as a cemetery without his authorization. Even earlier, in 1830, Besserer granted the Catholic Church a cemetery along Rideau St. that was moved in 1839 because it blocked the extension of Gloucester (now Friel) St. unto Besserer’s land.

However, the first recorded burial in Sandy Hill is that of John By Burrowes, the first white child born in Ottawa, the son of Thomas Burrowes (a surveyor who had worked for Colonel By) and Grace Rodgers. Sixteen years after the death of his son in 1827 when he was not yet a year old, Burrowes wrote his friend Dr. A.J. Christie:

I wish to tell you of a circumstance connected with the interment of my infant son. The spot chosen was on Sandy Hill, and was selected by John McTaggart and Self. After traversing the ground – then in a state of wilderness – poor McTaggart arrived at a healthy young beech … . McTaggart was deeply affected, and while his eyes filled with ill-suppressed tears, said to me: ‘Here, Tam, we’ll just lay the poor wee King’s head aneath this fine young tree.’ Poor ill-fated tree … — not more than five or six months afterwards, some barbarous hand cut thee down.” (Ross, 1927, p 56)

That grave has unfortunately been lost and is unlikely ever to be found. So, how many cemeteries have there been in Sandy Hill? The answer remains uncertain.

[1]Bones from that original cemetery were discovered recently during the construction of Ottawa’s light rapid train system.