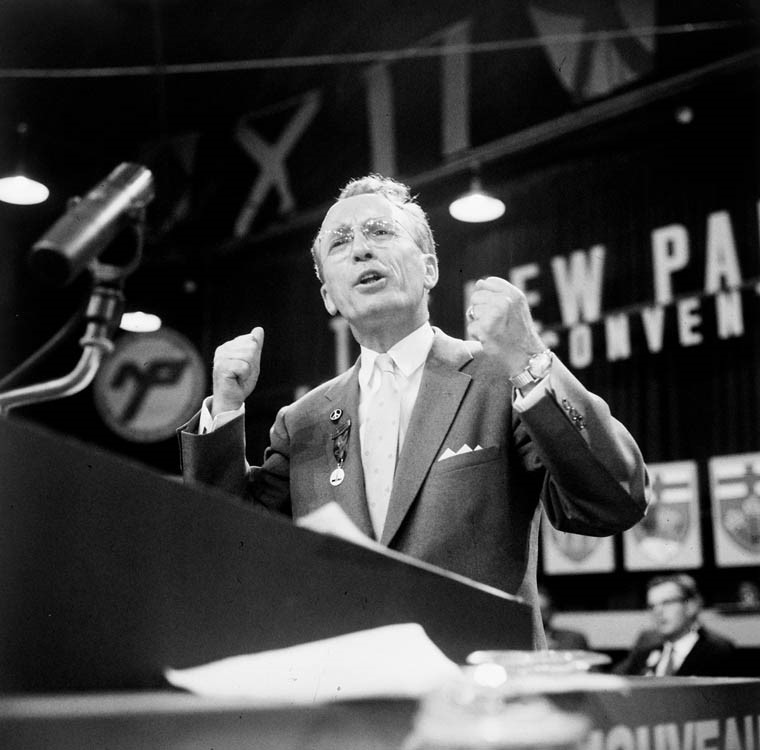 A preacher, a former premier of Saskatchewan (1944-1961), the father of Canadian medicare, Douglas was leader of the New Democratic Party between August 1961 and April 1971. He is also remembered for his vigorous defense of civil liberties during the 1970 October crisis. A 2004 CBC poll named him the greatest Canadian of all time.

Tommy Douglas was the leader of the NDP for almost the entire decade (1962-1972) he lived in Apt 108 of the Strathcona Apartments at 404 Laurier Ave E. Two national political leaders had previously lived at the Strathcona: John Diefenbaker (1955-56), and M. J. Coldwell (1948-1960), the leader of the Co-operative Commonwealth Federation (pre-cursor to the NDP).

Douglas gave up his successful premiership of Saskatchewan to promote democratic socialism as the leader of the then-fourth federal party (behind the Conservatives, the Liberals and the Social Credit). He fought six elections during these ten years (four national elections and two by-elections). He was an eloquent speaker and a skilled parliamentary debater, enabling the NDP to influence Canadian social policy during the Liberal minority government (1963-1968). The governing Liberals became so skillful at appropriating NDP proposals such as medicare and universal pensions that Douglas observed, “I don’t mind someone stealing my pajamas, but he should wear all of them if he doesn’t want to appear indecent.” (McLeod et al, 1987)

In October 1970, when the Liberal government invoked the War Measures Act in response to the kidnappings of a British diplomat and a Quebec cabinet minister (later murdered) by the FLQ (Front de libération nationale), Douglas led 15 other NDP MPs in the House of Commons in voting against the suspension of civil liberties. He argued that the proclamation of the War Measures Act meant that “there is no constitution in this country, no Bill of Rights. …The government has the power by Order-in-Council to do anything it wants – to intern any citizen, to deport any citizen, to arrest any person or to declare any organization subversive or illegal.” This principled opposition was deeply unpopular at the time but would eventually be recognized as Douglas’s “finest hour”. (Stewart, 2003)

Douglas remained an MP for eight more years after he resigned as leader and, at age 74, assumed the chairmanship of the Douglas-Coldwell Foundation. He was a popular public figure until his death in 1986. He is buried in Beechwood cemetery.