Lois Booth was the daughter of John Frederick Booth and grand-daughter of legendary John Rudolphus Booth. J. R. Booth was a Canadian lumber king and railroad baron who also had several other commercial interests. In 1892, his lumber mill was the largest operation of its kind in the world.[1]

Lois Booth grew up in a sprawling mansion at 285 Charlotte St. overlooking the Rideau River and Strathcona Park. Her aunt lived around the corner on Wilbrod and two cousins nearby on Range and Goulburn. The house, which became the Soviet embassy during World War 2, burned down on a very cold New Year’s Day 1956. Ottawa’s mayor at the time, Charlotte Whitton, famously had to intervene personally so the Soviets would allow Ottawa firemen to enter the building (it was the Cold War and the Soviets did not want any of their secrets to fall into unfriendly hands). By then it was too late and the house had to be demolished. The Soviet government hired W. E. Noffke (see profile) to design the building that now stands.

The big event of the 1924 social season was Lois Booth’s wedding to Prince Erik of Denmark (and cousin of King George V), the only royal wedding ever celebrated in Ottawa. Prince Erik and Lois Booth were married at All Saints Anglican Church on Laurier Ave. E. on February 11. The main headline in the Ottawa Citizen that day noted that “Ideal Canadian Winter Day Favors Nuptials of Popular Ottawa Girl and Danish Prince” while a secondary headline stated “Political and other Official Activity in Capital Suspended for Event”. Mackenzie King, Sir Robert Borden, Arthur Meighen and the Governor General were all in attendance although J.R. Booth, the bride’s grandfather, was not because he was recovering from an illness.

The interior of the church had been transformed for the occasion into a “Southern garden”, with the walls, windows and chandeliers all hung in southern smilax and white lilies, mostly imported from Florida, leading a commentator to describe the event as “the most pretentions wedding seen here” (Ottawa Citizen, 11 February, 1924). After the wedding, J. Fred Booth, the bride’s father, joked that he had borrowed a title for the occasion: “Count de Cost.[2]”

Huge crowds of mostly women lined the short distance between the Booth house and the church. Spectators stood on snow banks and climbed fences and even telephone poles to get a better view. Some fainted and had to be carried away. Others risked injury as they darted through traffic to get closer to the bride’s car. The deputy chief of police at the time reported that “every available man was pressed into service, but ten men could not handle a crowd of ten thousand, 90% of whom were women who would not do as they were told but smiled and giggled all the time” (Ottawa Evening Journal, 12 February, 1924). The press of the curious crowd was so strong that policemen had to lock arms and clear a passage to allow the wedding party to enter and exit the church. Even so, the throng was so dense that it took the bride several minutes to get to her car and she was jostled on the way, losing flowers in her bouquet and having her veil pushed askew.  Throughout, however, the mood remained light-hearted with some women in the crowd shouting to King “his turn next!”

Alas, there was no fairy tale ending to the wedding. The couple had two children but separated in 1934 and the marriage was dissolved in 1937. A few days later, Lois married Thorkeld Julesberg, the Prince’s secretary. Lois died at the age of 43 in German-occupied Denmark and is buried in the family plot in Beechwood cemetery.

[1] J.R. Booth was known as a frugal man who didn’t put on airs, despite his wealth and position. A well-known anecdote concerns the time Booth was criticized by a driver for only giving him a ten cent tip as Booth’s son always gave a quarter. Booth replied gruffly “That’s alright, the boy has a rich father, but I was an orphan! ”. At his death, Mackenzie King called Booth “one of the fathers of Canada”. 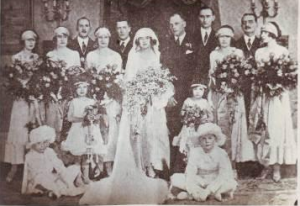