Anson Gard, “the Wandering Yankee”, was an American writer and humourist who wrote a dozen folksy books about Canada. Destined for international as well as domestic audiences, these combinations of oral histories and city directories were meant to be both informative and colourful. In 1904, Gard wrote what likely remains the thickest tourist guide ever-written about Ottawa (The Hub and the Spokes, 371 pages). Gard was quoted in the Ottawa Journal as saying that he wanted “Ottawa to become so well and pleasantly known that none will feel that they have seen Canada until they have visited its Capital[1]”. In this guide, Gard describes a walk he took on Laurier Ave. East from Nicholas St. to Charlotte St. It is interesting a century later to follow his footsteps and note what has changed. The text below is his except for the text in the square brackets, which is added for context.

If the day is fine, I would advise you to get off the [street]car [at Nicholas St.] and leisurely stroll along east, for a few blocks as there are so many places of note, that you should take your time. The old Rideau skating rink – the fashionable skating rink of the city, is off to the right, after passing Waller [where Simard Hall now stands], and at the south-west corner of Cumberland is the Juniorate of the Sacred Heart, connected to the University [now home to the University’s Visual Arts Department. The main University building burned down in 1903 and Tabaret Hall was not yet built]. …

Next across Cumberland is Sacred Heart church, a fine stone building [it burned down in 1907 and again in 1978]. …We soon come to King street [King Edward Ave.], which just here, looking north, is very pretty [King St. north of Rideau used to have a double row of tall trees on a central boulevard].

On the north east corner of King street is seen the cannon-guarded residence of Colonel L. F. Pinault, Deputy Minister of Militia and Defence [now the Angolan embassy].

At 221 Theodore (renamed Laurier Ave. E. in 1906] resides the popular commander of the 43rd Regiment. Colonel S.M. Rogers; at 245 lives Major Alphonse Benoit, Secretary of the Militia Department, and in the same block, 265 is the home and spacious grounds of the Chief Justice of Canada, Sir Elzéar Taschereau [now site of a new University student residence]. At Russell street is one of the finest residences in Ottawa, hat of Mr. George Goodwin, a large contractor [today Amnesty International’s Canadian headquarters].

That beautiful stone church to the right at the next street – Chapel – is All Saints… . The late Mr. Kingsford, the noted historian, lived on the corner of Chapel and Theodore. Opposite on the northeast corner is the house of the Premier, Sir Wilfrid Laurier, next east is the fine residence of Mr. J.C. Edwards, of the W.C. Edwards Lumber Company. The large square house, sitting far back, is the Japanese consulate [both houses have been replaced by high-rise apartment blocks]. … Beyond the consulate comes Stadacona Hall, the park-encircled stone residence of Sir Frederick W. Borden, Minister of Militia and Defence [today the Brunei High Commission]. Following on the same side of the street are the homes of … the Hon. Louis B. Brodeur, Minister of Inland Revenue; Joseph Pope, CMG, Under Secretary of State and Deputy Registrar General; next is seen the flower grounds of the beautiful home of John Mather, capitalist [today, the Cordon Bleu cooking school]; B.M. Armstrong, Controller, Railway Mail Service; and last, on this street resides Colonel R.W. Rutherford, Assistant Adj-Genl for Artillery in the Department of Militia and Defence. 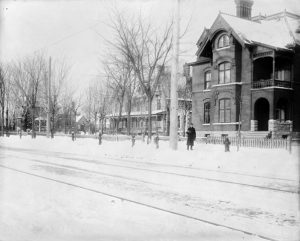 To the right beyond All Saints church we pass the home of W.H. Fraser, lumberman [now offices], the next on the corner of Goulburn Ave. we do not pass without stopping to admire the beautiful flower grounds of Chas. C. Cunningham, one of the winners of Lady Minto flower garden prizes for 1903. The last house, occupying a block, is the tree-embowered residence of Wm. H. Davis, one of Ottawa’s great contractors [replaced in 1927 by the Strathcona apartment building].

…We have now reached the turn at Charlotte street. The location is here rather an elevation with pretty views to the east and south. You look to the south over Strathcona Park, but little more than a name yet marks it [The Strathcona fountain was only installed in 1909].

A little over a century ago, the prime minister, two cabinet ministers, two deputy ministers, the Chief Justice and four wealthy businessmen all shared a seven-block stretch of Laurier Ave. E. As Gard wrote about all of Sandy Hill, “I have never seen, in any city, in any land, more people of prominence living in so small an area”.