One of three original landowners in Ottawa proper (Nicholas Sparks and the British Ordnance were the other two), Besserer was a Quebec notary, politician and businessman who inherited his 124 acre property in Sandy Hill from his brother in 1824. Besserer is often described as the founder of Sandy Hill. 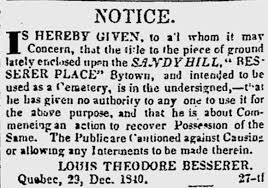 Besserer[1], the son of a German immigrant, was born just outside Québec City. He became a notary public in 1810, served in the militia during the War of 1812 and was a member of the Lower Canada House of Assembly between 1833 and 1838. The political turmoil arising out of the 1837 Rebellion (he had sympathized with the Patriotes but refused to take up arms) and the death of his first wife in 1843 may have persuaded Besserer to move to Ottawa in 1845 to take up his inheritance there.

Besserer built his house at 149 Daly Ave. at the corner of King Edward in 1844 or 1859 – sources disagree. While the location facing a busy arterial street may seem undesirable today, at the time it was built, the house sat isolated on top of a hill, commanding a view to the west and north. A Georgian-style house with French Canadian casement windows, it is the first large residence built in Sandy Hill. A veranda on all four sides, plus a widow’s walk on the roof would have given the house a grander appearance than it has today.

Besserer had his land surveyed and subdivided by William Stewart, but development started off slowly. Besserer’s debts forced the family to sell parcels at distressed prices, including to Henry N. Bate, one of the executors of his estate, sales that left an enduring bitterness in the family. He sold land at a bargain price to the Catholic diocese for the College of Bytown (later the University of Ottawa) and named two of the streets for his sons (Wilbrod and Théodore (now Laurier Ave. E.), Stewart St. for his land agent and Daly Ave., for a British official in Lower Canada who was his patron.

Besserer fathered 13 children with two wives, the last son born just a year before his own death when Besserer was 75. He named this son Louis-Joseph Papineau after the 1837 rebellion leader. The elder Papineau was present at the baptism.

Besserer also owned some land in Orléans where his descendants built a popular hotel and a wharf from which one could take a river cruise to Ottawa. One of Besserer’s sons, Théodore, was the first local postmaster and is said to have named the village after his birthplace, the Ile d’Orléans, near Québec City.

One of Besserer’s grand-daughters, Eugénie “Jennie” Besserer became an actor in Hollywood where she starred in several silent movies as well as opposite Al Jolson in The Jazz Singer.