The most prolific writer of his generation, Sulte was a poet, novelist but mostly an historian who authored an eight-volume history of French Canadians and an estimated 3500 articles on a wide variety of topics. Opinionated and an iconoclast, Sulte challenged the established view that the Catholic Church had assured French Canada’s survival. 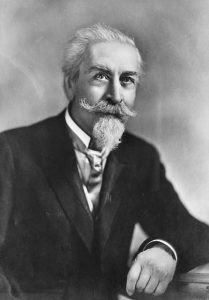 Full of optimism, Sulte called his house “Château-bonheur”. Alas, it would not be. His two children died in infancy and his marriage was a deeply-unhappy one. When he separated from his wife in 1912 after 41 years of marriage (divorce was not an option in those days), he confided to a friend that he has been keeping his own bedroom for the past 30 years.

After the separation, he lived for a few years with his sister Émilie at 144 McLeod St. before falling out with her and dying in relative poverty at his nephew’s home. He received a civic funeral in Trois Rivières, his home town, where he is buried.

Despite his modest upbringing and lack of formal education, Sulte became a public intellectual after he settled in Ottawa, playing a prominent role at the Institut canadien-français, becoming a founding member of the Royal Society of Canada (that he presided in 1904) and delivering hundreds of lectures. A man of uncommon energy and strongly-held views, he was described as “…rather full of fire; ready to laugh, ready to fight” (Maclean Rose, 1886). He explained his prodigious productivity (on top of all his writing, he held a full-time job for 33 years at the Department of Militia and Defense) by explaining that he wrote 30 articles at a time because it took as much effort to do the research for one as for thirty. He continued to work after he retired from the civil service and in 1914 was charged with preparing the official weekly list of Canadian losses during the war. In 1916, the University of Toronto awarded him an honourary doctorate.

Sulte’s poetry is featured on one of the 14 stations constituting the Poets’ Pathway around Ottawa[2]  where an excerpt from one of his poems can be read on a plaque beside the bike path in Overbrook off Queen Mary St.

[1] The 1872 City Directory notes that Sulte lived on “Wilbrod St., S[outh] side, near St Joseph church” but houses at the time had no number so it could have been another house. By 1875, he was at 304 Wilbrod.